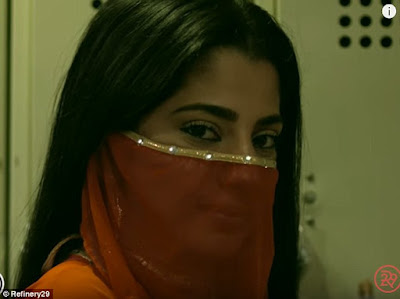 The 25-year-old lives in Los Angeles and has family in Pakistan. She used to thread eyebrows for a living before getting involved in the adult film industry, when she learned, she told Refinery29, that
dancing in a hijab or wearing scarves would help her to pull in millions of viewers. 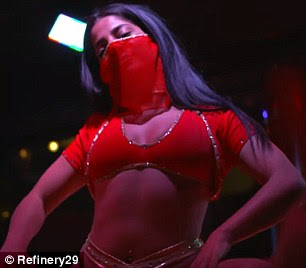 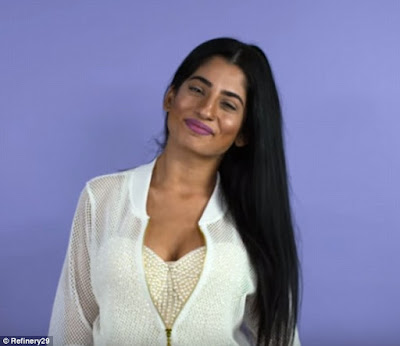 Nadia said in the video interview:
'I'm a practicing Muslim. Sure I have conflicts between my faith and day-to-day life, but doesn't everybody?' 'I practice Islam, for the sake of peace and guidelines of life - not to steal, be humble, be happy, be thankful.'One of the biggest main sins is adultery and doing it multiple times a day as an escort you will not be forgiven and I am fully aware of that but yet I still pray. But I don't escort anymore.' 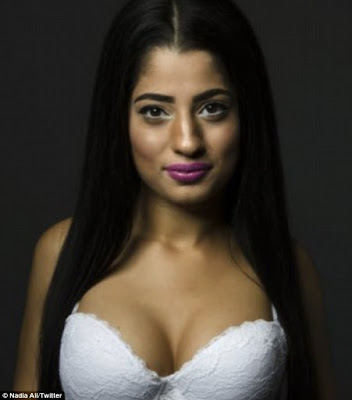 She said in the video that she has 'officially been banned from Pakistan' adding that 'they banned me because I wore the scarf and the traditional dress in the adult scenes and performed in Islamic wear.'

But when questioned about it by Daily Mail Online, she said she had not been notified of a ban through official channels, but suggested that it would be dangerous for her to go there.
She said:
'When people want to kill somebody they're not going to contact you, you're just going to know and feel.'Nadia said that although 'ideally' her parents would prefer she did not work as a porn star, they understand her motivations for it.
She said:
'Ideally, just like any other parent they do not like their daughter to do that type of work, but they have a good understanding of why I did things. I have a very good relationship with my parents, I'm very open about things.' Nadia wants to open her own beauty bar in the future.