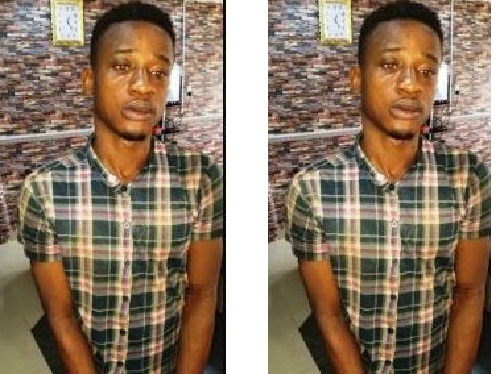 A  27-year-old man identified as Ebuka Everest reportedly attacked his former employer, Theresa Nnamdi, during which he tied her legs, stabbed and robbed her for sacking him in Ogun State.

The suspect allegedly inflicted injuries on his ex-employer, Nnamdi who lives in the Mowe in the Obafemi-Owode Local Government Area of Ogun State.

It was gathered that Ebuka, who used to work at Nnamdi’s fish farm allegedly forced his former boss to transfer the sum of N40,000  and took some valuables as revenge for his dismissal from the farm.

The Police Public Relations Officer in the state, Abimbola Oyeyemi disclosed this on Thursday, in a statement issued in Abeokuta.


Oyeyemi said the suspect had earlier attacked the manager of the farm before he attacked his former employer at her house.


Oyeyemi explained that Ebuka was sacked from the fish farm after he reportedly stole some items on the farm but he was caught by the farm manager.

Oyeyemi added that his dismissal from the farm infuriated him and made him pounce on his employer and the manager.

Recovered from the suspect were a knife, broken bottle, the rope he used to tie the victim’s legs, phones, laptop and other items he stole in the house.

Oyeyemi said the Commissioner of Police, Bashir Makama has ordered the transfer of the suspect to the State Criminal Investigation and Intelligence Department for investigation and prosecution.