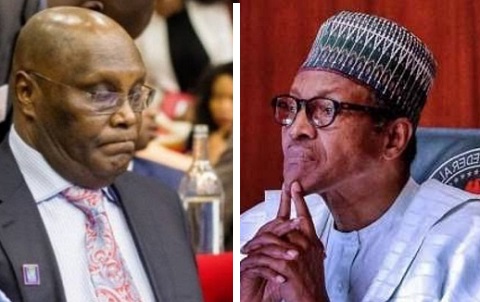 Atiku Abubakar, the Presidential candidate of the Peoples Democratic Party in the February 23 election, has formally filed an appeal against the judgement of the presidential election petitions tribunal at the Supreme Court.

The appellants want the apex court to hold that the tribunal erred in its decision to dismiss its petition against the election of President Muhammadu Buhari.

Atiku and his party filed the appeal on five grounds.

They alleged that the panel of the presidential election tribunal erred in law “when they relied on “overall interest of justice” to hold that the second Respondent’s (President Muhammadu Buhari) exhibits R1 to R26, P85, and P86 were properly admitted in evidence.”


They also alleged amongst other reasons that the tribunal erred in law “when they held thus: “My firm view is that Section 76 of the Electoral Act is clearly inapplicable to the issues under consideration.

“More importantly, the law is firmly settled that a candidate is not required by the Constitution or the Electoral Act to attach his certificates to FORM CF001 before the candidate can be considered or adjudged to have the requisite educational qualifications to contest the election.”

They also alleged that the tribunal erred in law when they held thus: “There was/is no pleadings in the Petition to the effect that 2nd Respondents failure to attach his certificates to Form CF001 amounts to lack of educational qualification to contest the election.

“In other words, the issue of failure to attach certificates which have been flogged throughout the length and breadth of the Petitioners Address (es) in Reply to 1st, 2nd and 3rd Respondents final written address is not the case of the Petitioner in the pleadings. No issue was joined on nonproduction of certificates or failure to attach them as an infraction of section 131, 137 and 138 of the Constitution of Federal Republic of Nigeria, 1999 as amended.
“All submission about the failure to produce certificates or attach same to CF001 is hereby discountenanced. Even if it can be said that the submissions made are in tandem with the Petitioners Pleadings on issues 1 and 2 the fact remains that none of the facts pleaded were proved or established as required by law.”