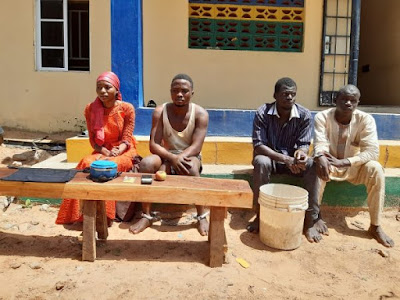 An 18-year-old girl has been arrested in Gombe for allegedly kidnapping the five-year old daughter of her uncle.

The suspect, Hadiza Babayo of Lafiya Lamurde Local Government Area of Adamawa state was arrested on Friday by operatives of the Special Anti-Robbery Squad (SARS) in Gombe.

The teenager was alleged to have connived with one Bala Shuaibu of the same address and abducted the victim from school.

Parading the suspects before newsmen, the command’s Police Public Relations Officer, SP Obed Mary Malum said the suspects kept the girl at a hotel in Nayi-Nawa area of Gombe metropolis and demanded N6 million as ransom from her parents.


She added that after a credible intelligence, Hadiza was arrested and confessed to the crime during interrogation which led to the arrest of the other suspect by the SARS operatives.

“After we received the report the kidnapping, the SARS operatives responded swiftly, cordoned off the hotel and rescued the victim unhurt, “without any ransom being paid and apprehended the other suspect, Bala Shuaibu.


Mary Malum said investigation is still ongoing and the suspects will be charged to court for prosecution.