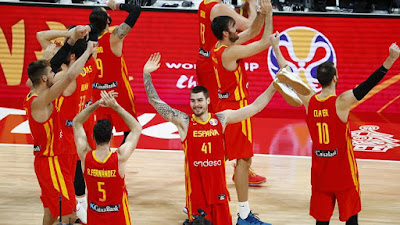 Spain beat Argentina 95-75 to win the Basketball World Cup for the first time since 2006.

Earlier in the day, France took the bronze for the second consecutive year after a 67-57 win over Australia.

The United States won the last two tournaments but were knocked out by France in the quarter-final round earlier in the week. Argentina then beat France in the semi-final.

In the final game, the Spaniards scored first and never relinquished the lead.


They relied on superior defence and rebounding to snuff out the offensive threat of 2004 Olympic champions Argentina.

Marc Gasol and Willy Hernangomez swatted three shots each as Spain pulled down 47 rebounds, 20 more than Argentina, en route to a comprehensive victory.

The 32 team tournament was hosted in China.