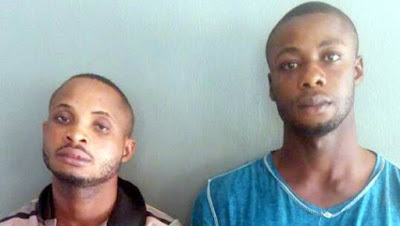 The police in Ogun State have arrested two brothers, Paul Jibunor and Nkoenye Jibunor, for alleged serial rape and robbery.

The  Command Public Relations Officer, Abimbola Oyeyemi, said the suspects were arrested on  December 31 following a complaint by one of their alleged victims at Ojodu Abiodun police division.

According to the complainant, she was picked in a taxi by three men on December 29 from Fela’s Africa Shrine in Oregun, Lagos State to Iwo Street, Ojodu Abiodun on an agreed fee.

She said the three men then dragged her out of their car, raped her and dispossessed her of her belongings.


She stated further that she later sighted the three men at Adebayo area of Ojodu and was able to recognise them.

“Upon her report, the DPO Ojodu Abiodun, Sp Bamidele Job, detailed detectives to the area where two of the suspects were arrested while the third one escaped,” Mr. Oyeyemi said.

He said on interrogation, the suspects confessed to the crime. He said further investigation revealed that the suspects had been involved in a series of rape cases around that area.

He said their mode of operation was to use Uber taxi to pick their victims to isolated areas where such victims are raped in turn before dispossessing them of their belongings.

“Some of the victim’s properties such as necklace, phone and wrist watch were recovered from them,” Mr. Oyeyemi added.

He said the Commissioner of Police, Ahmed Iliyasu, ordered the suspects to be transferred to the State Criminal investigation and intelligence Department for investigation and prosecution, and that the escaped member of the group be hunted down and brought to justice.