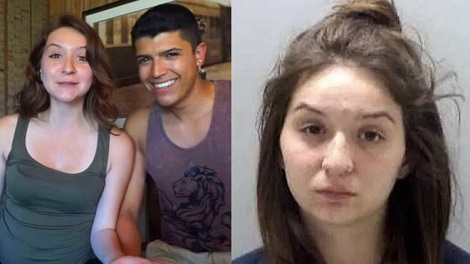 A 20-year-old woman who hoped to skyrocket to YouTube stardom with a daring stunt has instead pleaded guilty to second-degree manslaughter after fatally shooting her boyfriend while cameras rolled.

Monalisa Perez of Halstad, Minnesota, shot her boyfriend through a book he was holding to his chest for a stunt the couple intended to upload to YouTube. Ms Perez said they did not believe the bullet would make it through the 1.5-inch tome.

It did. The bullet tore through the hardcover encyclopaedia and entered her 22-year-old boyfriend’ chest, injuring him fatally. Ms Perez was pregnant at the time, and the couple’s 3-year-old daughter was standing nearby, authorities said.


Ms Perez’s plea deal requires her to serve 180 days in jail and 10 years on probation, according to the Minneapolis Star Tribune.

If she had proceeded to trial, a second-degree manslaughter conviction could have earned Ms Perez 10 years in jail and a $20,000 fine. Now, she will likely serve her 180 days in 30-day sentences over the next three years, with the possibility of spending the last six months on house arrest.

She will also be barred from making any money off of the video, and from owning a firearm for the rest of her life.

Ms Perez and her boyfriend, 22-year-old Pedro Ruiz III, were “vloggers” who regularly uploaded videos about their life in small-town Minnesota to YouTube. In the 18 videos still live on the couple’s channel, Mr Ruiz attempts low-stakes stunts, and the pair discusses their desire to reach YouTube stardom.

The shooting stunt appears to have been an attempt to raise the stakes of their videos. Ms Perez told investigators she initially resisted firing the gun, and that her boyfriend had to persuade her. She claimed he showed her a book that he had shot himself, in which the bullet did not go all the way through.

In a tweet that same day, Ms Perez previewed their plan, writing: “Me and Pedro are probably going to shoot one of the most dangerous videos ever

"We were doing a YouTube video, and it went wrong," she said, according to a transcript of the call. "It's all on recording."