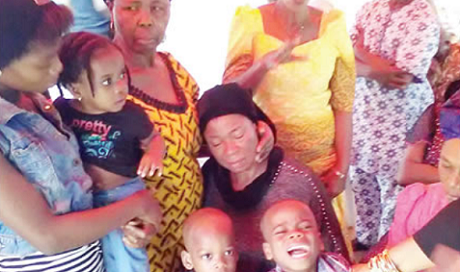 Tears flowed on Saturday on Alhaji Ganiu Street, Bako Estate, in the Ketu area of Lagos State, as 28-year-old Maureen Adejo, who was allegedly beaten to death by her husband, Olaoluwa Adejo, was buried.

Present at the burial were friends and family members of the deceased.

Punch had reported that 32-year-old Olaoluwa and the deceased, who hailed from Imo State, had been married for about five years.

The marriage, which was blessed with three children, was said to have been marred with disagreements as the bank worker later allegedly threatened to kill his wife.


She was said to have packed to her mother’s house, but returned for a party at her children’s school.

While Olaoluwa claimed that she took local insecticide, Sniper, their five-year-old son, Richard, said his father tortured his mother and forced the insecticide down her throat.

The case was subsequently transferred from the Oworonshoki Police Station to the Homicide Section of the State Criminal Investigation and Intelligence Department, Yaba.

The detectives removed the corpse from the Gbagada General Hospital morgue where it was initially deposited by Olaoluwa, and took it to the Lagos State University Teaching Hospital, Ikeja, for autopsy.

The result of the autopsy was said to have been released to the police just as the Lagos State indigene was arraigned and remanded last Wednesday.

The hearse bearing the remains of the deceased reportedly left LASUTH around 11am on Saturday.

It arrived at the Apostolic Christian Church Mission, Ketu, where it was received by scores of residents and sympathisers.

At 12pm, the service of songs was said to have commenced, as people paid tributes to the late Maureen.

The body was thereafter taken to the compound of her mother, Mrs. Kate Jonathan, where she was reportedly buried after a dust-to-dust rite.

A Punch correspondent was told that the couple’s first child, Richard, prayed on the body and waved her mother farewell.

Punch also learnt that the Lagos State Ministry of Justice had placed the three children in the custody of their maternal grandmother.