5 People Critically Injured After Car Rams Into Pedestrians In London

5 People Critically Injured After Car Rams Into Pedestrians In London 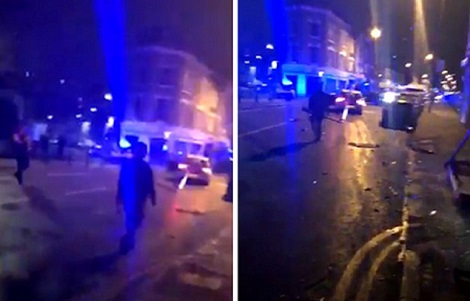 Five people have been injured after a car smashed into pedestrians in London. The victims, aged between 23 and 42, were injured in the collision on Stockwell Road just before 3am.

A Metropolitan Police spokesman confirmed all those injured in the incident were pedestrians and that no-one in the vehicle was injured. No arrests have been made.

A number of occupants made off on foot and abandoned the VW Golf, which was branded with the letter 'Q' on the side of the vehicle.

Police believe the incident took place after an 'altercation' between the occupants of the car and a number of pedestrians.


The busy South London road, which is near to a number of bars, nightclubs and restaurants, remains closed.

The road is closed between Brixton and Stockwell and expected to remain closed for the remainder of the morning while police carry out their investigations.

A spokesman said: 'Police were called at approximately 03:00hrs on Saturday, 2 December to reports of a car in collision with a number of pedestrians in Stockwell Road, near the junction of Sidney Street, SW9.

'This is not being treated as a terrorist incident.