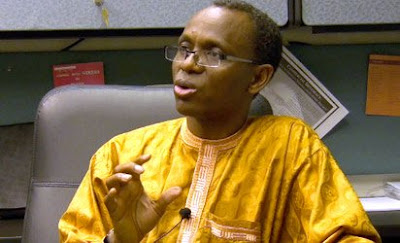 Nasir El-Rufai, the Governor of Kaduna State, has reacted to the exit of former vice president Atiku Abubakar from Nigeria’s ruling party, APC.

El-Rufai, a leader of the APC, spoke after today's Jumat prayer at the mosque in the Presidential Villa, Abuja. While answering reporter’s questions on Friday, Mr. El-Rufai said Mr. Abubakar was not driven out of the APC. Read the full details of questions asked Mr. El-Rufai and his answers below.

Q: How do you feel that Atiku has left the party that you are in together?

El-Rufai: Well, I won’t even say we were in the APC together. Some of us formed the APC, some of them joined because they thought that the APC was a platform for which they will contest election but when they didn’t get the opportunity they started looking around. Continue....


I have heard about what the former Vice President said about leaving the APC. We knew he was going to leave in December but he has left in November which is good because the earlier he leaves for where he belongs, the better. He has changed political parties a few times, there is nothing surprising. Before the 2019 elections if situation changes and he thinks he can get the ticket in 2019 he will come back. That is what he has done a few times.

Q: Some are saying you people have driven him out of the party?

El-Rufai: No one has driven him out of the party, the APC is an equal opportunity platform for everyone. He has in his statement of leaving the party made reference to the memo I wrote to Mr. President in September 2016, where I was calling on the President to reach out to party leaders that feel aggrieved and I mentioned him, the Asiwaju and many others. The others are still in the APC because they believe in the direction of the party, they believe we have come to save the country from a very bad situation. But the former Vice President is always looking for an opportunity to contest. He is a serial contestant and we wish him luck.

Q: Some Nigerians are saying that some members of your party loyal to him might go with him. How do you react?

El-Rufai: I don’t know about the loyalists in the APC that will go with him but I want to assure you that there is no one governor in the APC that is going to go with former Vice President Atiku Abubakar. The only governor that he would think will go with him, the governor of Adamawa State has already endorsed President Buhari for the 2019 elections. And there are many governors I will not mention the number but a majority of the APC governors have already taken the position that the president should run for a second term in office. And we are grateful to the Almighty God that the question marks about his health have been put to rest, he is getting better every day and we are confident that the way to preserve our party and preserve and advance the interest of Nigeria is for Mr. President to run for a second term. I’m curious to see which APC governor will go with Atiku. As for party loyalists it depends on what you defend as loyalists. We will wait and see how that evolves.
Atiku Abubakar

But as a governor I want to assure you that not one governor is going to leave the party to go with the former Vice President. That I am sure of. I can speak authoritatively about it because I’m in touch with my colleagues.

Q: Don’t you see him as a threat in the event the PDP gives him the ticket and he runs against the President?

El-Rufai: He has never been and will never be a threat to President Buhari. Let me say this very clearly, and I have said this to the former Vice President in 2014 Dubai when we met. Because before joining the APC, he sent for me. He told me of his intentions and I welcomed it because politics is a game of addition not subtraction. So the more you have the merrier.

However, I told him not to run for the presidency because I believe very strongly this is Buhari’s era. As long as President Muhammadu Buhari is in politics I do not see any Nigerian from the northern part of the country that will be able to match him in popularity. The people of the 19 northern states and Nigeria have decided because of the president’s past history of Integrity and good governance they are committed to him. Anyone standing up to challenge him is wasting his time. God has decreed that this is Buhari’s time and we are waiting for the PDP to give Atiku Abubakar the ticket and we will face him on the field. But I have no doubt that I will not lose any sleep about it.