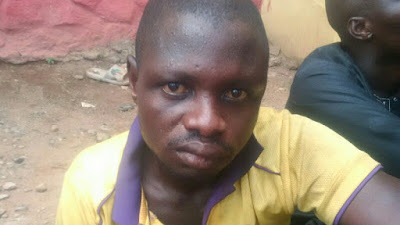 The alleged killer of a 17-year-old girl whose body parts were reportedly severed for money rituals, Yewunu Tanlaju, on Monday disclosed that he was contracted to do the job for N8,000.

The 35-year-old suspect made the shocking confession to journalists after he was paraded alongside two other alleged partners in crime at the police headquarters, Eleweran, Abeokuta.

He said he lured the girl, who was hawking snacks into a hideout at Arigo Ijofin located in Ipokia Local Government Area of Ogun State and murdered her.

”I was given the sum of N8,000 as contract job for the killing of the girl. It was Olusoji Asamo, the herbalist, who contracted the job to me,” he said.


The suspect said he, thereafter, overpowered the victim and tied her.

”I slaughtered the girl, severed her head, and also dismembered vital parts of the body, which include private part, heart, intestines and the two hands,” he said.

He told Premium Times that he later dumped the remains into a well and took the needed body parts to the herbalist.

The suspect also disclosed that the killing of the hawker was his second operation, adding that he was paid N10,000 for his first assignment.

Earlier at a press conference, the Commissioner of Police, Ahmed Ilyasu, said the arrest of Yewunu Tanlaju and two others, Olusoji Asamo and Joye Suru followed a report by the father of the deceased to the police.

The police boss added that officers attached to Ipokia Division began an intensive investigation into the case in conjunction with vigilante men and other members of the community.

”Their efforts paid off when they got an information linking one herbalist to the sudden disappearance of the girl. The said herbalist was promptly interrogated,” Mr. Ilyasu stated.

The commissioner said the herbalist confessed to have conspired with two others to kill the girl and dumped her remains in the well after removing vital organs such as the private part, head, heart, intestines and the two hands.

”The removed parts were recovered from the herbalist while the ‘remaining body’ has been deposited at Ilaro General Hospital morgue for autopsy,” the police boss added.