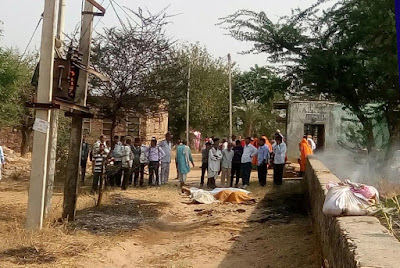 In a tragic incident, 10 people, including five women and a two-year-old girl, were killed while several others sustained critical burn injuries after a transformer exploded near Khatulai village near Shahpura town in Jaipur district on Tuesday afternoon.

The district administration feared that toll may rise as over 15 persons with burn injuries over 50% are being treated at the SMS Hospital in Jaipur.

Chief minister Vasundhra Raje ordered a highlevel probe into the incident and Jaipur district collector announced a compensation of Rs 10 lakh each for the victims. The police were making efforts to identify the bodies which were charred beyond recognition.


Villagers said that burning oil was gushing out from the burning transformer due to which several people, mostly women, sustained severe burn injuries.

Local leaders and villagers thronged the area and protested against the government for the electricity department for `criminal negligence. The families refused to send bodies of their relatives for the post-mortem until an investigation is ordered.