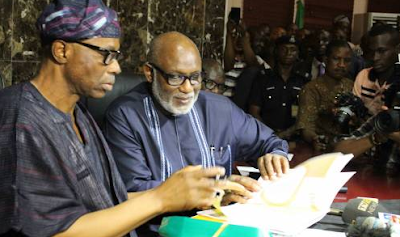 Ondo State governor, Mr. Rotimi Akeredolu has disclosed that the administration of his predecessor, Mr. Olusegun Mimiko, yoked the state with a debt of N220 billion.

Mr. Akeredolu, a personal friend of Mr. Mimiko, also disclosed his government inherited a paltry N9 billion from the previous government. He made the disclosures in Akure, the state capital, while inaugurating the 18 commissioners and 10 aides into his cabinet.

He explained that the huge debt profile of the state has hampered his administration’s capacity.