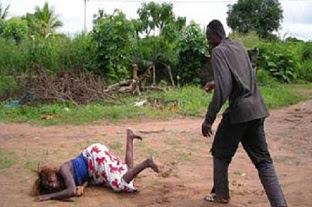 Middle aged man, identified as Ekene Ezeogo, has allegedly beaten his mother to death following a squabble that erupted in their residence located at No 24 Agbaja Road in Abakaliki Ebonyi State capital.

Findings revealed that the incident occurred yesterday when the woman identified as Prophetess Mary intervened in a fight that ensued between the suspect Ekene and his younger sister.

It was gathered that the case had been reported to the Central Police Station Abakaliki, but the suspect was yet to be arrested at the time of filling this report.

During a visit to the residence of the victim at 24 Agbaja Road Abakaliki by The Punch, it was obvious that all was not well as sympathizers sighted within the compound were in mourning mood.


Confirming the incident, the suspect’s step brother, Onyema Ezeogo, disclosed that Ekene’s mother died after her son pushed her to the ground and she hit her stomach on the ground.

“Ekene beat his mother and brush her down, the mother hit her tommy on the ground, Ekene carried her to St Agatha hospital for treatment, unfortunately she could not make it , the Doctor certified her dead,”he narrated.

Collaborating the story, a tenant in the victim compound who gave his name as Chinedu Sunday (m) told news men that he was working with the victim as a Missionary and expressed shock over the tragic killing of the woman, stating that other members of the family had been taken to another residential home for safety.

In his reaction, the Medical Director of St Agatha hospital Abakaliki Dr Lawrence Ezeogo who incidentally is the elder brother of the suspect confirmed the death of the victim, Mrs Mary (his mother).

He said that the woman was brought to the hospital unconscious as a result of his son (Ekene) attack, disclosing that she was later diagnosed of Uterian prolapse.

“We referred her to another hospital because of the Uterian Prolapse that was diagnosed of her, as far as I am concerned the suspect has committed some crime, if we don’t allow Police to come into this matter and investigate it properly, it means that some other person will do the same in that family, it is a very large family of 37 children with 5 wives,” Dr Lawrence revealed.