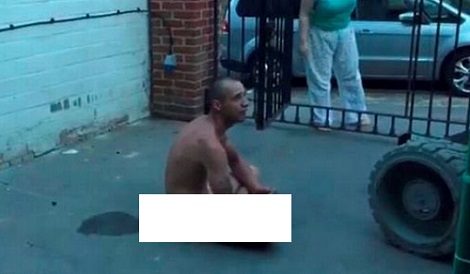 A group of Muslims were forced to barricade themselves in a mosque after a man stripped naked and hurled racist abuse at them.

Dan Morrison then climbed a crane and exposed himself to an entire town.

He was filmed singing "I'm Catholic til I die, and Christian as well" before shouting racial slurs at worshipers.

He shouted at nearby residents before going into the mosque's grounds, taking his clothes off and chanting.


The 26-year-old was arrested for the hate crime outside Folkestone Mosque, Kent, around 9pm on July 7, but the news all just came to limelight.

One witness described the incident as like "a bad dream", and said: "Fear started to sink in as he was stripping naked and threatening to use violence. It was real.

"My friend got hurt when he was trying to stop the man from entering the mosque.

"The man got extremely upset and he started to climb up the construction crane.

"My friend talked to the man and eventually managed to get him to climb down the crane and put his pants on.

Magistrates in Medway sentenced him to 26 weeks in prison and ordered him to pay a £115 victim surcharge.