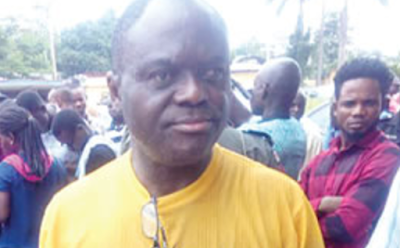 A middle-aged man, Ailabogie Aikpaojie, arrested by the Lagos State Police Command for unlawful possession of firearms – three pump action single barrelled guns and 250 live cartridges – has said that he bought the arms and ammunition from the state police command.

Speaking to journalists after he and several others were paraded for different offences by the Acting Commissioner of Police in Lagos State, Deputy Commissioner of Police Dasuki Galadanchi, on Friday, Aikpaojie, who also had a pistol with 9mm live ammunition on him when he was arrested, said he had done nothing wrong.

“I’m not a criminal, I wonder why I was being paraded,” he exclaimed. Continue...


In a chilling revelation that turned out to be an interesting one, the suspect said he bought the firearms from the Lagos State Police Command sometime in 2002 when he needed protection.

He said when he arrived the country then from the United States, where he has residency permit, he had security challenge, thus, he approached the then Police Commissioner, who helped him to arrange for the guns. He said he also had a function to attend in his village during the period, hence, he had to fortify himself.

He explained, “I had security challenge then, so I approached the police commissioner at that time. I told him I had a function in my village and I needed to be protected. I purchased the guns here in this Lagos State Police Command (Ikeja). I purchased the three pump action guns here.

“That place (pointing at the armoury) was where they sold the guns to me and this (pointing) box of cartridges. That other building (pointing) was where I did the licences for the three guns and I was given. But the licences are now with the Area Commander; they have seized them.

“Each of these (pump action) guns cost me N150,000, but I can’t remember how much I paid for the cartridges. Can anyone prove that I used it to commit crime? I need the guns for security.”

He queried why he should be arrested by the police that sold the guns to him.

He added, “If the police know I’m not supposed to have these pump action guns, why sell them to me? They brought someone who sold them to me right here on this police ground. In fact, I couldn’t take them out after they sold them to me until the licences were ready.”

As if that was not enough, Aikpaojie explained that as a businessman who has trucks that lift petroleum products, there were times his trucks would break down and he would need to send someone to the spot, saying he needed protection given his kind of business.

He said, “At times, the police provided me with policemen that travel with me, but sometimes when I come here (Command) to get approval for policemen, they hand the policemen to me without rifles, so I tell the policemen to use mine; the ones I bought here. I tell them that although it might not be as good as the ones they use, but they can manage them.”

He maintained that he was licenced to carry the guns, thus he had committed no crime.

Speaking about the pistol, he explained that he bought the pistol while he was in the US. When asked how he brought it in without being accosted whether at the seaport or the airport, he said, “I shipped the pistol around 2002. The gun mistakenly found its way to my luggage.”

When pressed further to know which of the ports, he said it was through the Tin Can Island Port in Apapa, Lagos State. “The pistol was not discovered at the port,” he said.

Explaining how he was arrested, he said that the gun had been in the country since 2002 but that it was when his family members saw the pistol somewhere in his house and showed him that he decided to take the gun to the Police Command to do the licence. According to him, he was arrested on the way.

He added, “I came to Nigeria on June 19. I was on my way to the office, driving, and I reversed to buy plantain when I was stopped. During their search, they asked where I got the gun on me and I told them I was taking the gun to the Command for licencing because it mistakenly came with my personal effect to this country. I expected the policeman to tell me how to go about it but instead he locked me up.

“Yes, I have a pistol. Illegal possession? Yes, but with an explanation. Can anyone prove that I use it to commit crime?”

Meanwhile, the Public Relations Officer of Lagos State Police Command, ASP Olarinde Famous-Cole, dismissed the claim that the suspect bought the guns from the command, saying there was no such thing. He added that the suspect had no licence for the guns.

Earlier, the acting commissioner had said the suspect was arrested on June 22 about 3pm by police operatives, saying he would be charged to court for unlawful possession.

He added, “He could not give a satisfactory account of where he got the Parabellum Baretta Pistol with 9mm live ammunition. Another search in his house led to recovery of three long single-barrelled pump action rifles with 250 cartridges.”