I Feel Sorry For Obanikoro For Reconciling With Tinubu- Bode George

I Feel Sorry For Obanikoro For Reconciling With Tinubu- Bode George 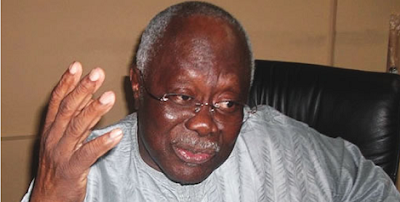 A former Deputy National Chairman of the Peoples Democratic Party, Chief Bode George, speaks with Toluwani Eniola about Musiliu Obanikoro’s reconciliation with Asiwaju Bola Tinubu and PDP crisis. It’s not the full interview, but brought you what ‘concerns’ us there, lol.

Musiliu Obanikoro, a staunch PDP governorship aspirant, has reconciled with Asiwaju Bola Tinubu, how did you feel about this development?

I am not bothered. I read his reasons for reconciling with Bola (Tinubu). He anchored his reconciliation with Tinubu on the problems in the PDP. But it is when there is crisis that you know the truly committed, dedicated and loyal people. Will the people he is going to meet there (APC) say well done, the faithful servant? I feel sorry for him. Tinubu and others were responsible for my travails during the Nigeria Ports Authority crisis when I was sent to prison for doing nothing. I can only wish Obanikoro the best of luck.


Do you see him as a betrayer for joining the APC?

I won’t use that strong word to describe him because he (Obanikoro) is still my brother. I can only advise him that we are here only for a short time. That popular song says, “Feso jaye.” Let him take heed. Life is not a bed of roses. The highway of life goes into the valley once in a while. There is no human being who will not go through one trial or another. But that tunnel of tribulation is to test your strength and faith in God. If you believe in him, you will triumph. That is what he should think about.

Is his defection connected with his ambition to become the governor of Lagos?

Did he even realise the governorship ambition in the PDP? I have advised him severally, he didn’t listen to me. He said I was too hard and that I hate him. But now, he will go to the APC and he does not need to say I hate him anymore. The benefits and problems of the party should be enjoyed and borne by all. That is the beauty of democracy. It is not only the goodies of the party that you share. You should share in the problems of the party.

What is you grouse with Obanikoro?

During the last administration, I led a delegation from the South-West to Jonathan. I complained that there was no indigenous minister from Lagos State in his government. Jonathan said he would satisfy us. He then asked us to bring three names from Lagos, that he would consider one of them as a minister. I called a meeting of all the leaders from the senatorial districts in my compound to nominate names from each district. Obanikoro’s name was last in the Lagos-Central senatorial district. They didn’t vote for him. I gave them free hand to nominate and vote. After voting, they gave me three names which I took to Jonathan.

Jonathan wanted a woman as a minister. He rejected the initial names we submitted and asked us to nominate three qualified women for the job. I took the message back to Lagos. They nominated the women and I took the paper back to the president, to choose any of the three women we suggested. Then I travelled (out of the country). When I came back, Obanikoro came to my house and prostrated before me.  I asked him what the problem was.  I said, “I hope you have not committed any crime?” He said no. He said Jonathan had chosen him to be a minister and that he had got his appointment letter. He said he was asked to come and seek my support. I said the final decision on who would represent Lagos could only be taken by the President. I said there was no way I would challenge Jonathan’s decision. Obanikoro went to the Senate for confirmation and the likes of Mrs. Oluremi Tinubu and other APC senators opposed his nomination. But David Mark was able to manouvre for him and he was confirmed. Obanikoro left there and came straight to my house to come and thank me. He thought I would oppose him. I said, “Obanikoro, listen, I am a Christian. If you want to be minister, go and be. God must have said you will be a minister.” Two months after, he came to me and said he wanted to be governor. I said, ‘Obanikoro, if you knew you wanted to be governor, why did you go and lobby Jonathan to be minister? He said, “I didn’t lobby sir.” I said if he didn’t lobby, how did his name get to Abuja? I made up my mind not to support him. I asked him why he didn’t allow somebody else to be minister when he had a governorship ambition. I said, ‘na you alone dey for this party?’

Will you join the APC if the Makarfi faction loses at the apex court?

Me? (Laughs) That is like pouring petrol into fire. If Makarfi did not win, I will be so happy to go to my house and say to my children, “I think I have run the race and played my part.”

Are you saying you will retire from politics if Sheriff wins?

Yes, I am going home. I won’t work with him. My concept of operation would have been affected.