Photo: Thief Returns Car 21 Years After It Was Reported Stolen

Photo: Thief Returns Car 21 Years After It Was Reported Stolen


A woman whose car was stolen in Johannesburg 21 years ago couldn't believe her ears when police told her it had been found.

However, seeing is believing, and when Merna Meyer got to the Newcastle police pound, she had no doubts that it was her Ford Laser, 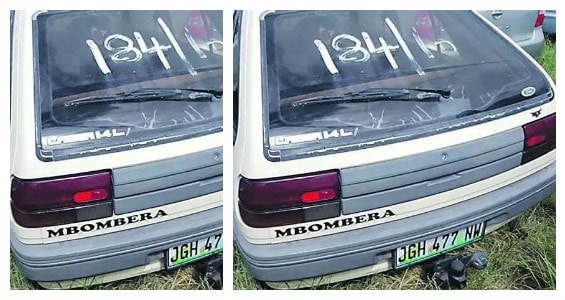 According to SA news medium, Netwerk24:
"I recognised the sporty look, red and green stripes on the sides and tow bar. Even the colour is still the same beige."The front looked a bit different and the steering wheel had been replaced with a racing one, she said at North West University's Potchefstroom campus on Thursday.Meyer was full of praise for warrant officers Gary Holmes and Derick Putter of the Newcastle car theft unit for tracking her down. They spent months trying to find her because the car had been registered in her maiden name, Pretorius.
"They kept on trying, until they phoned me two months ago. When I picked up the phone, a policeman said: 'We've had a hard time tracking you down, where have you been hiding?'"Meyer was in her 20s when the car was stolen outside a friend's house in Melville in 1996. She had just resigned from the SABC and was due to leave for the UK a few days later to do a course in animation.

After reporting the car missing, Meyer said she had never heard from the police again.

The Newcastle police became suspicious when the alleged owner of the car came to the police station in 2016 to get a vehicle clearance certificate. They noticed that it had false serial numbers and, using chemicals, managed to uncover the original ones.

No arrests have been made yet.