Guardiola was speaking shortly after goals from Sergio Aguero and Leroy Sane, sealed a 2-0 win over Sunderland on Sunday at the Stadium of Light. 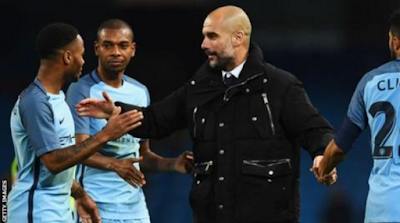 City are now eight points behind Chelsea, who travel to West Ham on Monday night.

“It’s three more points. We are there


behind, of course, Chelsea, because they are almost unstoppable,” Guardiola said.

“It’s a pity that the distance between us and Chelsea is so big.

“We started the season winning 10 games in a row, but our game was not like it is today.


“That is normal after seven or eight months together — we know each other better. I know the players better, they know me. I feel we are playing quite good.”

Guardiola also urged Sane to keep improving, if he wants to become one of the best players in the world. The Germany winger has scored six times in his last 10 games

“He is so fast and runs in behind like few players in the world,” the Spaniard said.

“But he’s just 21 years old, so the gap to become a really good player is still big.


“I can say that because I was the manager of the best player in history [Lionel Messi]. That’s why I know he can improve.

“The moment he’s going to relax is going to be in another place, not on the pitch, because we want to help him. With this talent it would be a pity not to try to realise all this potential that he has.”